As you may have guessed I enjoy books and movies very much and so when I hear that a book I loved is getting the film treatment I’m filled with excitement and apprehension as to whether it will live up to the imagery in my head.

Lord of the Rings and the Harry Potter series were both spot on, Paycheck was very much off the mark.

Here’s a few in the pipeline or already released elsewhere but yet to hit the UK.

One of my favorite authors, Neil Gaiman, wrote a grown-up fairy-tale about a star that falls to Earth (a little like 10th Kingdom but with less comedy).

Much of the cast, the directory and writing team are all English although the ‘star’ role goes to the very lovely American Sienna Miller. The film is scheduled for an October 19th release here in the UK and is already out stateside.

Neil also has Beowulf and Coraline coming out in 2007 and 2008 respectively.

The first book in Philip Pullman’s His Dark Materials series will no doubt be compared to Harry Potter in that it is a series aimed at children, features magic and has a strong female character in the lead. The similarities extend to the first book in the series having a different name in the USA and England but thankfully end there.

Whilst the casting of the film looks good abandoning the religious aspects is worrying – why DO the directors and film companies feel the need to excise or alter important parts of source material that has already proven a commercial success?

Cross your fingers and hope it hasn’t lost too much for the UK release on December 7th.

Will Smith is leading the role as the last human being alive on the planet after a condition turns the rest of the population into vampires. He goes hunting by day whilst they sleep and ensures his home is fortified for the nightly onslaught when they wake.

Richard Matheson penned the novella in 1954, any novel still in print 50+ years after it was written signals to me the book must be good.

One worry is that Hollywood will turn this into a massive in-your-face action flick instead of the brooding horror of the book. The trivia at IMDB notes large budgets, sets and military vehicles/extras so this is a very distinct possibility. Hollywood have done this several times with Philip K Dick’s books and just not getting the point that his stories show ordinary people in extraordinary circumstances.

We will find out here in the UK January 4th and Mr Matheson has The Box and The Incredible Shrinking Man due out in 2008.

Philip K Dick’s book is the story of a golden man, the next evolution of humanity, who can see into the near future and his attempt at escaping his pursuers (kind of like the escape scene in Minority Report).

Not technically forthcoming as it hit the UK shores in April but I missed it being that it had a totally different name to the book. Being that the guy who can see into the future is now a Las Vegas magician played by Nicholas Cage I’m not sure I’ll bother.

If there was a point to the book about how we will react to our own evolution it’s lost. Perhaps Hollywood think that’s been covered enough by the X-Men franchise.

Richard K. Morgan writes the story of one Takeshi Kovacks, an ex-military elite soldier in a future where your body is easily replaced providing the metal backup device implanted in the base of your skull is in tact. Kovacks is egotistical, violent and methodical in his new job as a private investigator seeking out why his rich client apparently committed suicide (and was promptly restored from backup but lost some essential hours).

The book is gritty and certainly not aimed at children. Would Hollywood pay the big bucks required to get the imagery right for such a grand undertaking of a film that would be limited to an adult/18 category is unlikely but somebody has the rights and is penning in a 2009 release date.

If the film is a success there are two more books in the series which will demand grander sets and even larger budgets.

Morgan Freeman picked up the rights to Arthur C. Clarke’s fantastic novel about a large cylindrical object that enters our solar system briefly and the subsequent exploration of it’s interior but has seemingly done little since.

There used to be a web site with some renders and notes but that has long since gone and the ‘producers are still working on the adaptation’ and Morgan’s schedule seems to indicate he is rather busy on other projects.

Morgan claims that part of the delay is getting a studio on board that doesn’t want to turn it into an action movie (great news and can be a success as Contact shows) and that they are still working on the script (get David Peoples on the case).

Whilst the film is on a grand scale it would probably be relatively cheap to film as most of it could be green-screened against rendered backgrounds being that everything inside Rama is not man-made anyway.

Book: The Art of the Start 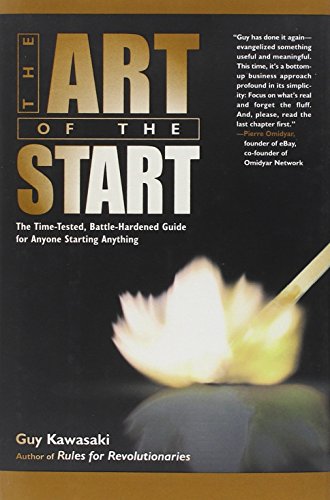 I’ve just finished reading Guy Kawasaki’s The Art of the Start and I must say I’m quite impressed.

For the last two years I’ve been working for at a start-up on an interesting product. We’ve got the core of our ‘magic sauce’ working just great but now I’m relying on business people to make it happen and I should probably have some idea of what that involves and how I can help.

This is where Kawasaki’s book steps in and whilst seemingly-short packs in lots of useful and practical information on developing your product, team and company from scratch.

As Guy is now running a venture capitalist company and was there in the early day s of Apple as a software evangelist he certainly has the credentials to be putting it all on the line (or should that be paper) for you to digest and he certainly delivers in clear English what he’s expecting from people approaching his company for funding.

Check out Guy Kawasaki’s blog where he puts up additional information, video clips, tips, hints and templates along the same lines as his book.

In an attempt to quench my thirst for all things C# and having already torn through the great .NET Framework Design Guidelines and less-great Effective C# I grabbed a copy of Applying Domain-Driven Design and Patterns (With Examples in C# and .NET) by Jimmy Nilsson.

The book is obviously based around domain models but also gives some coverage to test-driven development, NHibernate, design patterns, refactoring, code-smells etc.

This is only a first-look as I’m only up to page 130 of the 500+ the tome weighs in at but here are a few observations so far.

The Impedance Mismatch Between Domain Model and Relational Database

One annoyance with the book is that is identifies and discusses problems and then offers no discussion or ideas for a solution before moving onto another topic.

A good example is this section which touches on the mismatch between the primitive types of .NET and SQL without the consideration of how/where to check this, the fact that SQL types can be null with no regard to .NET 2’s INullable, bit flags or ‘magic values’.

How to Recognize If an Application Will Be Long Lasting

Another perfect example of the previous problem. The heading asks the question but the short anecdote about how a hacked together app became mission critical fails to answer it.

Jimmy proposes a number of techniques that fly in the face of .NET Framework Guidelines and other solid material. This is highlighted by the phrase;

As long as the fields are both readable and write-able and no interception is needed … public fields are at least as good as properties.

Perhaps Jimmy doesn’t know that converting a field to a property later will break binary compatibility with anything using your assembly.

…expose sub-results so they are testable

flies in the face of hiding the implementation and Jimmy does at least refer to this balance but the whole idea of exposing unnecessary details for the sake of being able to test them gives me a shudder.

block to classes that really need to expose their internals to your test tools and compile with that switch set in your testing environment.

Jimmy extracts the factory methods into a new class and but then leaves them static. A static class throws away substitutability, extension and indeed everything that makes OO great for the sake of being able to access it like a global variable.

On page 102 Jimmy refactors a “public IList Children” field firstly making it a read-only property and then creates a AddChild method which is fine but then how will he stop people modifying his IList? With ArrayList.ReadOnly(children) of course bemoaning how clients still see .Add etc.

Hello Jimmy, let me introduce you to IEnumerable.

Use reflection to set internal properties from Factory & Repository!

Jimmy describes how some properties should be read-only but then the Factory and Repository need to set the values. He proposes reflection.

All the code samples use _ for internal members – something that Microsoft guidelines and their FxCop tools are keen to stamp out. Besides being ugly it also reeks of the obsolete Hungarian naming prefixes.

The whole book is written in “I still remember”, “I worked on an application”, “After that, I tried Domain Models”… It makes for slow reading at times.

Well that about wraps it up so far.

Okay so my current munchy reads Great Expectations but those who’ve visited my Zen-like abode will have admired the un-Zen-like bedside tower of pulp that rivals the best Pisa has to offer in the way of leaning towers. For a few days Pip has been taking a back-seat to a tome of non-fiction…

One Hit Wonderland comes from the multi-talented and under-exposed British writer, musician and comedian Tony Hawks. When not appearing on TV and radio shows he takes to writing books that chronicle taking on unlikely bets in the hope of impressing a friend or, most lately, getting laid. This book, his latest, starts with such a bet made at a dinner party where Tony takes on the challenge of creating another musical hit…

Another musical hit you may wonder, after all Tony is not a house-hold name, but in 1987 had a number 4 hit with Stutter Rap, originally performed as part of his stand-up comedy and later released by fictional band Morris Minor & The Majors. The band produced a follow-up single but the novelty nature of their song (parodying Beastie Boys while paying homage to a few other 80’s hits) meant the follow-up disappeared without much of a trace and the entered the one-way tunnel of the one-hit-wonder. They did however manage to spin-off a six-episode TV show based on the characters under the name Morris Minor’s Marvelous Motors.

The book is a pleasure to read, witty yet honest as Hawks take every opportunity to achieve his mission and exploits the clause that allows him to apply his talents everywhere from Memphis to Southern Sudan and through eastern Europe to find recognition and adoration. On his way he’ll bump into “Pop Idol”‘s Simon Cowell, 60’s comic legend Norman Wisdom and top lyricist Tim Rice.

His other two books revolve around betting he couldn’t travel Round Ireland With a Fridge or beating the Moldovan football team at tennis. They’ll both be hitting my reading tower soon providing I can get clearance from ATC.

He should, under no circumstances, be confused with American video-game darling and skateboarder Tony Hawk.